Your nemesis, Apple, has been running a highly visible and effective campaign in which your brand is personified as a clueless dolt.

Your product-performance shortcomings (and there are many) have been systematically exposed and attacked.

As a result, Apple’s share is growing, particularly with younger users, which does not bode well for your future.

What do you do? 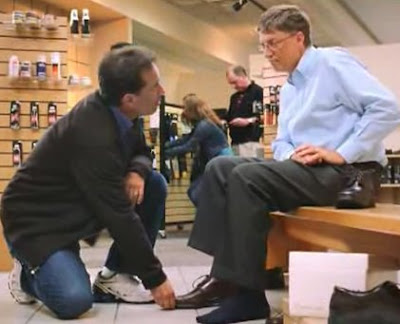 Try this: Launch a new campaign featuring Jerry Seinfeld and Bill Gates, in which Seinfeld helps Gates shop for shoes in a cheesy mall store, and then asks Gates if computers could be made to taste like cake.

Confused? You should be. But that’s exactly how Microsoft has chosen to respond.

There are two pre-conditions for a “teaser” spot: A massive ad budget and arrogance. If you possess neither of those characteristics, you would do well not to learn the wrong lessons from Microsoft’s missteps. Don’t be fooled by the buzz that this campaign may generate; buzz is not the same as image-building (image-repairing, in Microsoft’s case), nor does it necessarily equate to sales.

Microsoft’s problems won’t be solved by advertising. They should have taken that massive ad budget and instead invested it in creating something that serves a need. And if Microsoft felt they must respond to Apple in this medium, their selection of this execution simply proves how clueless they are.

This is advertising about advertising.  It’s self-indulgent and almost totally meaningless to those to whom it’s meant to communicate.

Copyright 2008 – Matthew Fenton.  All Rights Reserved.  You may reprint this article with the original, unedited text intact, including the About Matthew Fenton section.

2 Replies to “Microsoft, Seinfeld & Gates: Less Than the Sum of the Parts”